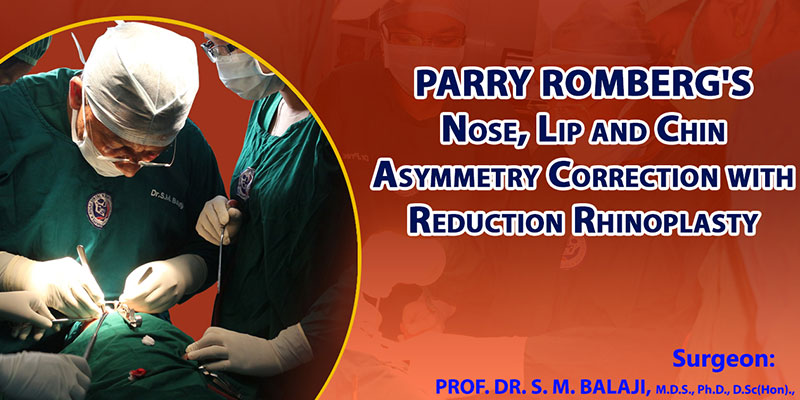 Parry Romberg syndrome is a rare neurocutaneous syndrome of unknown origin. It causes progressive hemifacial atrophy. This is often sporadic in its course. It leads to shrinkage of tissues underneath the skin. Only one side of the face is often affected. It also rarely extends to other parts of the body. Females are most commonly affected by this disease. Onset is often between 5 to 15 years of age. Other associated morbidities include those of a neurological, ocular and oral nature. Severity of this condition varies between patients.

Patient with Parry Romberg syndrome referred to our hospital

This middle aged male from Tirupati presented to our hospital for management. He has undergone previous surgeries elsewhere. The patient presented with nose, lip and chin asymmetry. He desired establishment of symmetry to the face.

Treatment planning and surgery explained to the patient

Dr SM Balaji examined the patient and ordered diagnostic studies. He explained that fascia lata graft from his thigh needed to be harvested for this surgery. The patient agreed to the treatment planning and consented to surgery.

Attention was next turned to the upper lip. A midline incision was then made on the inner aspect of the lip. The fascia lata strip was then tunneled from the corner of the lip on the left to the midline incision. This was then sutured and secured. This resulted in establishment of lip symmetry.

Attention was then turned to the nasal asymmetry. Intranasal incisions ensured absence of any visible scars. Lateral osteotomies were then performed of the nasal bone. The medial cartilage was then partially excised from the nasal septum. This resulted in good nasal symmetry.

The patient recovered from general anesthesia without event. He expressed his happiness at the results before final discharge from the hospital.