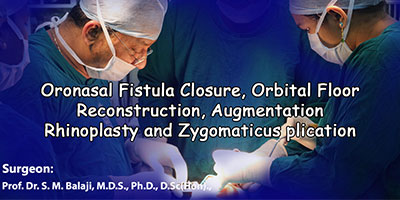 Extensive fractures of the facial bones and failed treatment

This young lady is in her early 20’s. She met with an automobile accident on the way back home from work. This resulted in panfacial fractures. She was first taken to a nearby hospital for first aid. Following this, she was then admitted elsewhere for repair of her facial fractures. It took around 6-8 months for her facial swelling to subside. She then realized to her dismay that fixation of her fractures showed deformity. The patient now had a degree of facial disfigurement.

She was in distress over this. It was then that she presented to Balaji Dental and Craniofacial Hospital, Chennai. The purpose of her visit was for posttraumatic deformity correction. Dr SM Balaji, Cranio-Maxillofacial Surgeon, examined the patient. He next ordered extensive imaging studies including 3D axial CT scans. This revealed that she had suffered panfacial fractures. The fractures involved the nasoorbitoethmoid (NOE) complex. Fractures to the orbital floor and the palatal part of the maxilla were also seen. The NOE complex fracture had left her with a saddle nose deformity due to flattening of the nasal bridge. She also had a degree of right-sided facial nerve palsy. There was also an oronasal fistula from improper closure of the palatal fracture.

Closure of her oronasal fistula and orbital floor reconstruction planning

Dr. Balaji explained to her that she needed closure of the oronasal fistula first. Next would be orbital floor reconstruction and augmentation rhinoplasty using rib grafts. She would then have zygomaticus plication for correction of her residual palsy. He described the surgical process in detail to the patient. Her parents and she were in agreement with the treatment plan. The patient was then scheduled for surgery.

Rib grafts were first obtained after successful induction of general anesthesia. A Valsalva maneuver demonstrated absence of perforation into the thoracic cavity. The incision was then closed in layers. Attention was then turned to the oronasal fistula. This was then closed with a palatal rotation flap. Attention was next turned to the augmentation rhinoplasty. A graft was next placed through intranasal incisions. This corrected the patient’s saddle nose deformity. There were also no visible scars. The intranasal incisions were then closed with sutures. Following this, a gingivomucoperiosteal flap was next raised on the right side of the mandible. The plates that were screwed in place to fix the body of mandible fracture were next removed.

The flap was then sutured in place. An incision was next made in the maxillary vestibular area. Dissection was then done up to the area of the zygomatic arch. An incision was then made over the old scar on the right cheek. This was to access the plate fixed on the zygoma. This plate was then removed. A rib graft was next screwed to the area of the bony defect in the zygoma through an intraoral approach. The incision over the right cheek was then closed with sutures. This was then followed by closure of the maxillary vestibular incision with sutures.

Following this, markings were then made on the outer alar reduction. Crescent shaped tissue wedges were next removed from bilateral ala. The ala were then sutured into their new positions. This resulted in reduction of the width of the nostrils.

The patient recovered well from her surgery. She expressed her happiness at the results of the surgery before discharge.