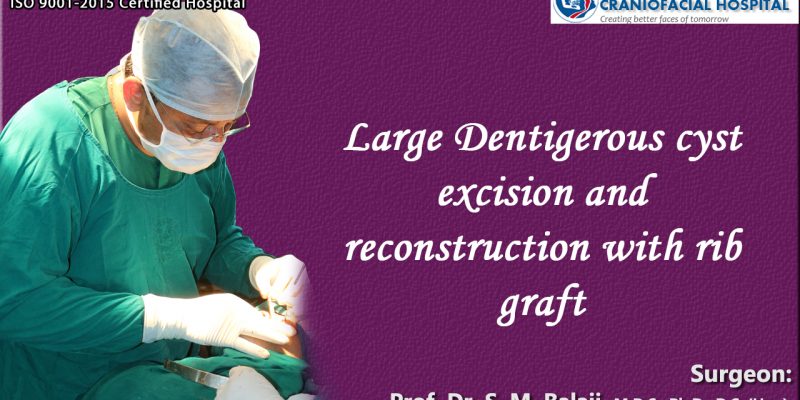 Patient with a left lower facial swelling for one year

This is a 28-year-old patient from Haryana, India who developed a swelling on the lower left side of the face. The teeth in this region gradually became mobile as the swelling increased in size. This alarmed her a great deal and she presented to a dentist. He obtained x-rays and diagnosed the swelling to be a dentigerous cyst as there were numerous impacted supernumerary teeth within the lesion.

She then noticed a swelling developing in that region again. Evaluation by the same dentist revealed that the cyst had recurred in the region again. It had also become quite extensive at this point. The dentist explained that she needed to undergo surgical removal of the cyst followed by jaw reconstruction at a specialty center. It was also explained that this did not come under the purview of orthognathic surgery. He then referred her to Balaji Dental and Craniofacial Hospital, Chennai, which is a renowned center for cyst removal surgery in India. It is a premier center for jaw reconstruction surgery in Chennai.

What is a cyst?

A cyst is a soft tissue sac that consists of a membranous lining. It can be filled with air, fluid and various other substances. It can occur almost anywhere in the body. There are many types of cysts. These include sebaceous cyst, ovarian cyst, primordial cyst, pilonidal cyst, dentigerous cyst, etc. Dentigerous cysts always occur in association with an unerupted tooth. They occur in the mandible and complete enucleation is the only treatment for this cyst. The cystic wall lining has to be completely removed to prevent recurrence of the cyst.

Rehabilitation of patients who have undergone surgery for dentigerous cyst

Any teeth associated with the cyst have to be extracted. Replacement teeth or artificial teeth are always required after the healing process has been completed. Removable dentures were most commonly used before the advent of dental implants. Long term success with dental implants would be possible only with maintenance of good oral hygiene. Implants last a lifetime if coupled with good dental care.

Dr Branemark who revolutionized dental implants could have never imagined the implications of his discovery. The use of dental implants has made it possible for patients who lose a sizable portion of their jaws to diseases or trauma to lead fully normal lives. Adequate nutrition is a prerequisite for leading a healthy life and dental implants enable maintenance of a normal diet that includes all food groups.

Dr SM Balaji, facial reconstruction surgeon, examined the patient and obtained a detailed history from her. He then ordered comprehensive diagnostic studies including a 3D CT scan. The patient had a swelling involving the left mandible. The 3D CT scan revealed a cystic lesion in that region that extended from lower right lateral incisor to the left lower third molar. There was also evidence of perforation of the lingual cortex of the mandible. Treatment planning was explained in detail to the patient who agreed to the plan and signed the informed surgical consent.

It was planned to remove the lesion through a marginal resection along with extraction of the involved teeth to prevent recurrence. It was also planned to reconstruct the resultant bony defect in the mandible through the use of a costochondral graft that would be harvested from the patient.

Under general anesthesia, two costochondral rib grafts were first harvested from the patient through a right inframammary incision. A Valsalva maneuver was then performed to ensure that there was no perforation into the thoracic cavity following which the incision was then closed in layers with sutures.

This was followed by placement of a crevicular incision in the mandible following which a mucoperiosteal flap was elevated. The region of the mandible with the cystic lesion was then identified and exposed. Teeth overlying the cystic lesion were then extracted followed by marginal resection of the bone. The impacted third molar, which had been identified in the imaging studies was then extracted without incident and diathermy was then applied to cauterize all bleeding points.

Reconstruction of the bony defect caused by removal of the cystic lesion was then performed. The costochondral rib grafts were crafted and shaped to fill in the bony defect. These were then fixed with titanium screws to the region following which the wound was closed with sutures. The patient would return in three to four months for dental implant surgery after consolidation of the rib grafts with the mandibular bone.

The patient expressed her total satisfaction with the treatment results before final discharge from the hospital. She will return in a few months for placement of dental implants. Permanent crowns will be placed on the implants once complete osseointegration of the implants with the bone has taken place, which would indicate completion of her rehabilitation following her cyst surgery.