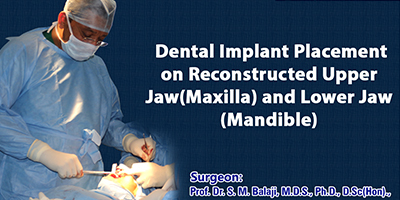 Dr. S.M. Balaji explains the advantage of implants to the patient:

This patient presented at Balaji Dental and Craniofacial Hospital, Teynampet, Chennai, a few months ago with multiple missing teeth in both jaws. The patient has been partially edentulous for many years now. The patient requested dental implants to replace the missing teeth. Dr SM Balaji examined the patient and ordered CBCT(Cone Beam CT Scan) diagnostic studies in order to do bone mapping of the patient’s jaws. It was found that bone had resorbed in both the maxilla as well as the mandible.

It was explained to the patient that the existing bone was inadequate for fixing the implants and that bone grafting would be required to reconstruct the maxillary and mandibular alveolar ridges in order to place the implants. The patient consented to surgery and bone grafting was performed.

Implants placed for the patient:

The alveolar flaps were then closed with sutures. Once adequate osseointegration had taken place between the implants and the bone over a period of 4-6 months, the flaps would be raised again and the crowns would be fixed on the implants.