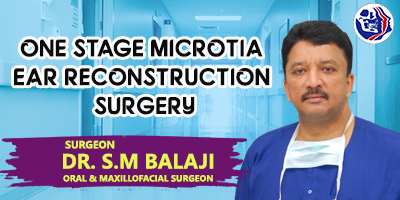 The congenital underdevelopment of the external ear is defined as microtia. A completely undeveloped external ear is known as anotia. Anotia is the most extreme manifestation of microtia. Microtia is one of the birth defects that can appear in isolation or in conjunction with a syndrome. Some common syndrome that present with microtia include hemifacial microsomia, Treacher-Collins syndrome, Franceschetti syndrome and Goldenhar syndrome.

Unilateral microtia is more common although occurrence of bilateral microtia is also recorded. The right ear is more commonly affected than the left ear. Fabrication of prosthetic ears using latex was in vogue in the early 1900-30s though esthetic results were not as satisfactory. Silicones are used currently for fabrication of prosthetic ears now and these ears offer satisfactory esthetic results for the patient.

It is important to determine as early as possible if the patient’s hearing can be restored through surgery. A CT scan is performed at around the age of 5-6 to determine the degree of development of the external auditory canal. Placement of cochlear implants can be considered in cases of complete lack of development of the external auditory canal. This will restore normal hearing for the child.

Sound waves are transmitted to the inner ear through two modes. One is air conduction and the other is bone conduction. What we know as normal hearing is through air conduction. This is much clearer and the sounds are much sharper. The sound waves are propagated through the external auditory canal and strike the ear drum in this case.

The second mode of propagation of sound waves is through bony conduction. When we have a severe respiratory illness or an ear infection, the external auditory canal gets blocked. Though we are still able to hear sounds, it sounds muffled and has a vibratory quality. This is because the sounds we hear are reaching the eardrum through the bone. This is known as bony conduction.

A few other reconstructive techniques were utilized for microtia reconstruction in the past although they have been discontinued to lack of good long term results. Treating microtia is also a form of plastic surgery. Cosmetic ear surgery requires the surgeon to have an artistic vision of the final surgical outcome. When the reconstruction is unilateral, the surgeon should be able to visualize the process through which symmetry of the ears will be achieved.

An ear framework template or cartilage framework is first constructed and the cartilaginous rib grafts that are harvested from the patient are crafted to suitable size and shape. The reconstructed ear should be symmetrical to the normal ear. This surgery can also be done in a single stage when the deformity is not extreme as illustrated in the case described below.

This is a young boy with microtia in the form of a congenitally deformed right external ear. He is now 8 years of age. Teasing at school by other children was causing great distress to him. His concerned parents consulted a local surgeon to enquire about ear reconstruction surgery in India. He explained to them that a good ear reconstruction surgeon would be able to correct his ear deformity.

Cost of microtia surgery in India

Cost of ear reconstruction surgery in India is only a fraction of what it costs in developed countries. The results are however as good as in any western country. He made extensive enquiries and referred them to Balaji Dental and Craniofacial Hospital. The patient and her parents subsequently presented at our hospital.

Patient presents at our hospital for microtia surgery

Dr SM Balaji, ear deformity correction surgeon, examined the patient. He ordered facial biometrics for both the deformed ear and the normal left ear.This would ensure that the reconstructed right ear was symmetrical to the normal ear. Biometric studies revealed this to be a constricted ear. Detailed planning for the surgery was done. Usual microtia ear reconstruction surgery is normally performed in three stages.He decided to do a single stage deformity correction as the microtia was not very severe. It was explained to the patient’s parents that a costocartilaginous rib graft needed to be harvested for the procedure. The patient’s parents were in agreement and consented to the surgery.

Under general anesthesia, a costocartilaginous rib graft was first harvested from the patient. A Valsalva maneuver was next performed to ascertain that there was no perforation into the thoracic cavity. The incision was then closed in layers with sutures.

Attention was then turned to the deformed external ear. The harvested rib graft was then shaped to fit into the outer border of the helix of the external ear. Two incisions were then made in the helix and the cartilage tunneled through the incision to form the border of the ear helix. This resulted in a normal form to the external ear. A preauricular flap was raised to aid in full tissue coverage of the anterior incision. Both incisions were then closed with sutures.

The patient and her parents expressed complete satisfaction at the results of the surgery before final discharge from the hospital.