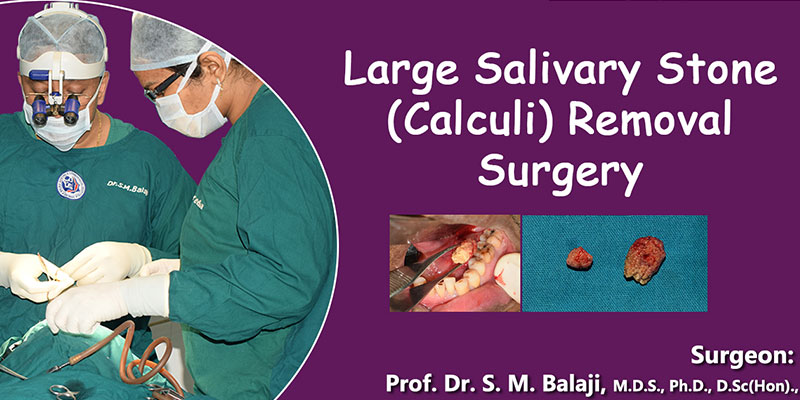 Patient with painful lumps under his tongue presents for treatment

The patient is a middle aged male from Cuttack. He stated that he had felt two hard lumps under his tongue. This has been causing pain for around two years now that increases while eating. He presented to our hospital for definitive management and treatment.

A diagnosis of sublingual salivary calculi confirmed through studies

Dr SM Balaji examined the patient and ordered diagnostic studies. A 3D sialogram and OPG demonstrated presence of two sublingual salivary duct calculi. Palpation of the region revealed two hard masses in the left sublingual duct. Treatment planning was then explained to the patient who agreed to the surgery.

Under adequate general anesthesia, the opening to the Wharton’s duct was first identified. Gentian violet was then injected into the duct to fix the position of the calculi. The calculi were first palpated to confirm their location. A small incision was then made at the orifice of the salivary duct. The two calculi were then manipulated and teased out of the duct. This would ensure uninterrupted flow of saliva after healing.

The patient recovered from general anesthesia. Postoperative healing was uneventful and salivary flow was normal and at optimal level. The patient expressed his gratitude before final discharge from the hospital.