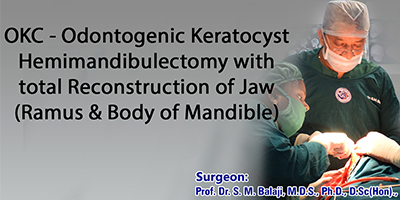 The patient’s presentation and history:

This young 13-year-old Northeastern girl was brought to Balaji Dental and Craniofacial Hospital, Teynampet, Chennai, by her parents for treatment of a painless swelling involving the right side of her lower jaw that had been present for over a year.

Her parents had not taken this slowly developing swelling seriously for a very long time and had neglected going to a doctor. It was only when it had grown to a very large size that they decided to seek medical help for their daughter.

Search for a good surgeon:

They had approached many hospitals throughout India, including premier surgical centers in other metropolitan cities, but had been turned away because of the extent of the lesion in her mandible. It was only after many months of futile search that they were finally referred to Balaji Dental and Craniofacial Hospital in Chennai for management of their daughter’s condition.

Dr SM Balaji, Cranio-Maxillofacial Surgeon, examined the patient and ordered extensive investigations including 3D axial CT scans. Radiographic studies revealed the presence of an odontogenic keratocyst in the right side of the mandible, which involved both the ramus and the body of the mandible. It had spread so extensively that it had completely breached through the cortical bone of the ramus of the mandible into the soft tissues surrounding it.

Dr. Balaji explained to the patient and her parents that except for the condylar region, the right side of the mandible would have to be completely removed because of the extent of the lesion. He further explained that the mandible would then be reconstructed using a titanium plate with costochondral rib grafts obtained at the same surgery. The parents were in full agreement with this treatment plan and the patient was scheduled for surgery.

After the successful induction of general anesthesia, two costochondral rib grafts were harvested from the patient. The incision was then closed in layers after a Valsalva maneuver demonstrated absence of perforation into the thoracic cavity.

A right sided mucogingival flap was then raised and reflected down to the vestibular sulcus.  The flap was reflected until the affected areas involving the body of the mandible was exposed. An extraoral incision was then made at the region of the angle of the mandible and dissection was carried down to the ramus. The bone in the affected regions was extremely soft and friable.

The patient and her parents expressed their thankfulness to Dr SM Balaji before being discharged from the hospital.