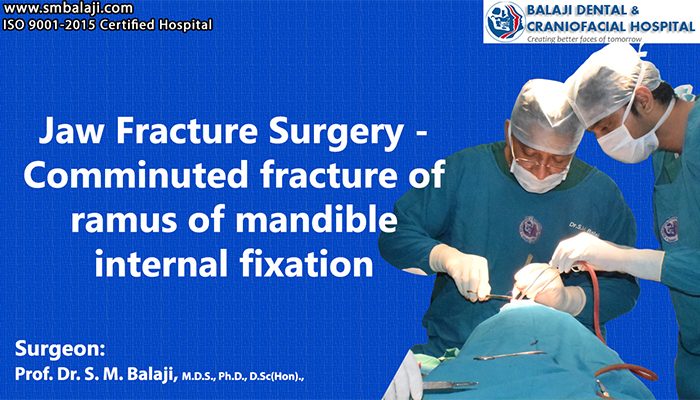 Mandibular fracture in a young man after road traffic accident

The patient is a 25-year-old IT professional who was brought by his parents to Balaji Dental and Craniofacial Hospital after a road traffic accident. He had been riding his bike to work when a speeding car rear-ended his bike at a traffic signal. The impact was sufficient enough to make him lose his balance and he fell with his chin impacting the road directly. He felt intense pain with grating noises upon trying to speak. He was not wearing his helmet at the time of the accident. Onlookers at the site of the motor vehicle accident informed his parents who immediately arrived at the scene. The patient also suffered minor facial injury from direct facial trauma.

Helmet wearing is scientifically proven to protect the head during accidents

This accident clearly demonstrates the safety value of wearing a helmet when riding a two wheeler. Though the patient’s accident was relatively minor, he suffered quite a severe injury with two fractures of his mandible requiring open reduction and internal fixation. Just the simple act of wearing a helmet would have saved him the grief of undergoing major surgery for his fractures. It should be noted that wearing a helmet without strapping it under the chin would essentially be useless as the helmet would get dislodged from the head at the time of impact.

Emergency treatment administered to the patient at a nearby hospital

The patient was taken immediately to a nearby hospital where first aid was administered for the minor skin lacerations and abrasions he had sustained on his body and face. A tetanus toxoid injection was also administered as the wounds had been contaminated with road debris along with broken bone. The patient was then referred to our hospital for further management as our hospital is well known for facial fracture surgery in Chennai.

Dr SM Balaji, facial fracture surgeon, examined the patient thoroughly. The patient was unable to provide a verbal history because of inability to move his mandible. He then ordered imaging studies including OPG and a 3D CT for the patient. These revealed that the patient had a displaced fracture of left body of mandible, a fracture of the left lower second premolar and non-displaced right mandibular ramus fracture extending up to the coronoid process. Luckily, there were no fractures to other facial bones other than the mandibular fractures. For example, orbital fractures to the orbital rims with involvement of the eye sockets, condylar fractures, upper jaw or nasal fractures would have complicated the treatment manifold.

Treatment planning explained in detail to the patient

It was explained that the entire mandibular fracture surgery would be performed through an intraoral approach to avoid scar formation. They were also informed that the patient’s jaws would be wired shut for a period of two to three weeks to help with the healing process and that he would not be able to open his mouth during that period. He was also advised to take a liquid diet for about 2-3 weeks followed by a semi-solid diet. The patient and his parents were in complete agreement with the treatment planning and a written consent was obtained from the patient.

Successful reduction of the mandibular fracture with titanium plates and screws

Under general anesthesia, an arch bar was first fixed to the maxillary and mandibular arches. An incision was then made in left lower mandible to access the fracture site. The fractured left lower second premolar was extracted. Fractured segments of the mandibular bone were then reduced. Occlusion was checked and the bone segments were stabilized and fixed with titanium plates and screws. Following successful reduction of the fracture on the left side, an incision was then made in the right mandibular sulcus. A flap was raised and the fractured segments were identified. These segments were then stabilized and fixed with titanium plates and screws. Occlusion was checked again and was found to be normal. Care was taken to avoid damage to the inferior mandibular nerve throughout the procedure and there was no nerve damage at the end of the procedure. The patient tolerated the procedure well and recovered uneventfully from general anesthesia.

The patient and his parents expressed their satisfaction at the outcome of the surgery. Intermaxillary fixation was done postoperatively and would be removed after a period of three weeks.