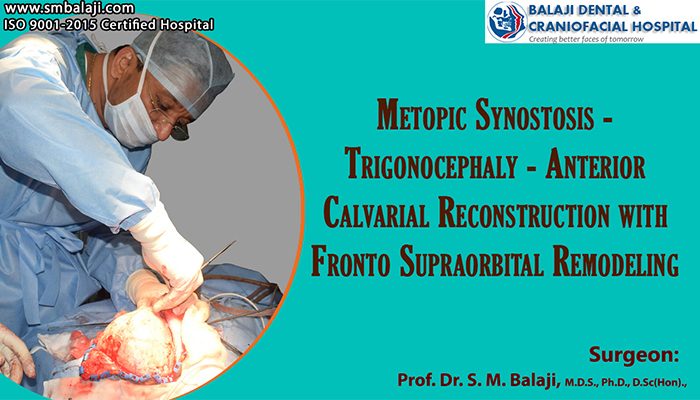 The occurrence of craniofacial abnormalities in infants

A small percentage of infants are born with craniofacial anomalies. The frontal, parietal, sphenoid, occipital and temporal bones comprise the bones of the skull. The joint between these bones are called sutures. Infants born with trigonocephaly have a noticeable ridge running down the middle of the forehead. The old terminology for this defect was metopic craniosynostosis.

These birth defects are corrected by a surgery comprising of a team of neurosurgeons, plastic surgeons and craniofacial surgeons. This also comes under the purview of plastic surgery as there is esthetic improvement in the shape of the baby’s skull. Cleft lip surgery is an example of plastic surgery where there is functional as well as esthetic improvement through surgical intervention. Advent of the CT scan has enabled the development of such complicated surgeries to have a high degree of success.

The patient is a 6-month-old boy who was born in Punjab, which is the agricultural heartland of India. His parents noticed that his head was abnormally triangular in shape when viewed from above. There was also a prominent bony ridge on his forehead. Alarmed about this, they approached a local neurosurgeon. Suspecting that the patient had premature fusion of the metopic suture, the neurosurgeon obtained x-rays and diagnosed metopic synostosis with trigonocephaly.

Referral to our hospital from World Craniofacial Foundation

He got in touch with the World Craniofacial Foundation (WCF), which is an organization that helps with complete surgical rehabilitation of children born with prematurely fused cranial bones and other craniofacial deformities. Dr Kenneth E Salyer, Founder and director of WCF then referred the patient for surgery to Balaji Dental and Craniofacial Hospital (BDCH) in Chennai. Having identified BDCH as a center of excellence for craniofacial surgery in India, WCF had made the Balaji Craniofacial Foundation its Asian affiliate partner for referring such cases to our hospital.

Confirmation of diagnosis at our hospital

Dr SM Balaji, craniofacial surgeon, examined the patient and ordered 3D CT and other comprehensive imaging studies for the patient. These confirmed that the patient had metopic synostosis with trigonocephaly. This is a condition that arises from the premature fusion of the metopic suture of the skull. This results in the triangular shape to the skull.

A 3D stereolithographic model of the skull was obtained. In consultation with the neurosurgical team, a mock surgery was performed on this skull. Meticulous treatment planning was done and explained to the parents of the boy. They gave their consent and the child was scheduled for surgery.

Fixation with sonic welding of the resected bones

Next, beginning at the pterion, a bone cut was made at the frontozygomatic suture and extended through the roof of the orbit to the frontonasal suture. This was then extended to the contralateral side. This resulted in complete detachment of the supraorbital bar from the skull. The metopic ridge on this segment was then trimmed. This was then advanced anteriorly by around 3-5 mm and fixed using sonic welding.

Sonic welding consists of a polymer implant, which is picked up by the hand piece tip and inserted into the predrilled hole in the bone. When an ultrasonic sound wave is generated at the tip of the hand piece, the resultant vibration causes friction between the bone and the implant. This melts the polymer and makes it flow into the surrounding trabeculae of the bone. The polymer hardens once the hand piece is removed. This stabilizes the segments of the bone and holds it in place. The polymer slowly dissolves by the time bone healing is completed, thus making another surgery for removal of the implants unnecessary.

The bicoronal flap was then brought back into position and closed with staples. The patient recovered well from general anesthesia and was taken to the recovery room in stable condition. Skull anatomy was observed to be normal and the parents of the baby were extremely satisfied at the results of the surgery.

Complete recovery during the postoperative period